Above: Bigg Taj chats about the state of the beatbox scene

Scotland's best noisemakers gathered a fortnight ago for the first major Scottish beatbox battle event of 2017 at Glasgow pub Nice N Sleazy. The free event attracted a loud and enthusiastic crowd, comprising a mix of hip hop heads and casual passers by. 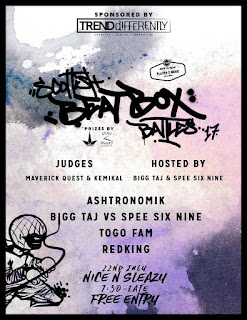 But the real showcase was the battles, which were hosted by UK beatbox champion ABH. The eight man tournament showcased beatboxers with a range of skills, from the more technically gifted to the more musically inclined.

The full results were as follows: in the first round, Boycebox beat Napoleon, Styx beat Ionix, Maciek beat L, and 5th Element beat Biscuit Beats due to a no-show. Boycebeats took the semi final over Styx while Maciek knocked out Fifth Element.

Maciek's versatile style, which combined hip hop and drum and bass styles, was enough to overcome Boycebeats in the final.

He told SSU he was thrilled with the win: "It feels good. It was a tough competition, but I was very confident going into the final because I felt like the other semi final wasn't correctly decided. But everybody did their best and got what they deserved I think.

"Improvising and trying out new sounds has been the most influential thing for me. I like to stand in front of the mirror, trying to make the silliest faces and sounds ever, and then develop them.

"It was a big pressure to perform in front of someone like Bigg Taj. I've been watching his videos for a long time and I was inspired by a few of his sounds. He uses his voice to perfection."
Newer Post Older Post Home