Has 2014 been Scottish hip hop's most successful year yet? We were everywhere: Loki finally dropped G.I.M.P. to critical acclaim; Young Fathers blew up and won the mercury prize with Dead; and Scottish battler Soul made waves on the massive King of the Dot platform. Edinburgh six-piece Stanley Odd only have a limited amount in common with these respective acts, but they too had a year to be very proud of.

This year saw the group share a stage with the likes of Franz Ferdinand and Mogwai as they played 'A Night for Scotland', a celebration of Scottish music by yes voting artists. Having followed up this performance with a UK tour, their stock has only continued to rise. What Stanley Odd represent is important: genuine and alternative Scottish music. Therefore it was a privilege to speak to the group's emcee at the forefront... Solareye.

First of all, how are things?


Great, thanks. It’s been quite a year. We played our last show of the year on Saturday at the Garage – which was bananas – and we’re just starting to have a blether about next year now. Onward, ever onward.

You guys just got off a mini-uk tour. How have you found it down south? Do you find crowds just as enthusiastic?

The English dates of the tour have been excellent. It’s nice to see places where we’ve played before with audiences building and growing, and the response has been amazing. In terms of the element of social commentary to our songs, people seem to be genuinely interested in hearing our take on things. We’re generally talking about stuff that folks can identify with, or relate to in one way or another. In London we played with Granville Sessions, who were great. Hopefully we can bring them up to Scotland next year for some shows.

I've just been listening to some cuts off your latest album 'A Thing Brand New', which I hope to review in the coming weeks. You've dabbled in politics as a narrative device before (such as the track 'Marriage Counselling'), but would it be fair to say you are more open with your sentiments on this project?

Yeah, definitely. I think that’s just down to a natural progression as a writer more than anything else. For the last couple of years I’ve been trying to focus on writing honestly and adding more personal reflection into my lyrical content, as well as broader social referencing. I reckon writing that way has an effect on how direct you are with the topics you address. Plus, with the referendum this year, the whole country has become incredibly politicised and positively engaged in examining what our options are and how the way we are governed affects us. With that level of analysis and reflection, it definitely spills into what and how you write I guess.

The track 'Son, I Voted Yes' has done particularly well, and you were even tweeted by Nicola Sturgeon. How was experience of 'A Night for Scotland'?

A Night for Scotland was amazing. We were blown away to get asked to play in such illustrious company, and the response on the night was quite overwhelming. It felt like there was so much potential and good will. It was a really amazing event to be a part of.

Along with Young Fathers and Hector Bizerk, you guys have broken out of boxes that Scottish hip hop artists often feel that they're placed in. First of all, being a band, would you consider yourselves hip hop? And do Scottish emcees always need a niche to be taken seriously?

It is exciting to see hip-hop in Scotland become more widely recognised. I have said this before, but the quality and diversity of hip-hop being made across the country right now is at the highest I’ve ever seen it and it feels like a great time to be involved. Do we consider ourselves hip-hop? Aye.

Do you guys still follow the Scottish scene?  Which Scottish emcees are a particular influence on your own style?

Loki – I’ve been a fan of what he does for the last 10 years or so, and I think the music he’s making right now is some of his very best work.

Louie – from Hector Bizerk to his solo stuff, collabs and battles, Louie is always on point.

Tickle – I love his originality. He always comes at a topic from his own perspective and his delivery is ridiculous.

Teknique and One Tzu – both super nice rhymers. One Tzu’s 'Go Drunk You’re Home' is bananas. Plus they’re keeping that freestyle rap alive with Sketch the Rhyme.

Ciaran Mac – has the skills and creativity plus the work ethic. He’s going from strength to strength so I’m excited to hear what he does next.

Butterscotch/Spring Break – another dude whose stuff I’ve been into for a long time, his new group Spring Break is super nice.

Mistah Bohze – need I say more? Always fire, with the beats with the rhymes, whatever.

Empress – I heard her stuff on SoundCloud and Youtube the last couple of months. Her flow is nice and the content is there too, so I'm looking forward to hearing more recorded material.

Sorry, this list could go on and on. Peace and love to all the emcees... 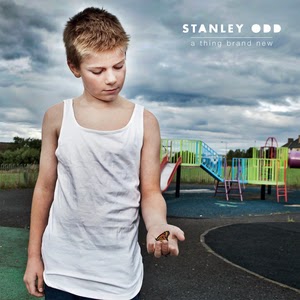 More broadly, considering your distinct sound, who were your main influences when making this new record ('A Thing Brand New' - right)?

The plan with this record was to try and write 10 or 11 songs. That maybe sounds daft, but the main plan was to try and write some songs where the words and the music complimented each other and fitted together. I think that maybe in the past it could sometimes felt like 'words over music' on our recordings, so that was the plan.

In terms of musical influences everyone in the band has very different tastes, which I think makes for a really healthy melting pot of ideas. We’ve started doing a weekly Spotify playlist of 4 tunes from each band member called 'The Odd Tune on a Friday' - it’s mental to see what a strange collection of songs get picked. This week we’ve got artists ranging from Royksopp, to Burt Bacharach, to Sigur Ros, to M.O.P. – that’s one diverse mix haha.
What can we expect in 2015?
Scottish tour, UK tour, Europe and festivals so far is the plan. Let’s see what happens.

Thanks for taking the time to talk to SSU.
Stay Odd.Peace, Solareye.

A Thing Brand New is out now, released on A Modern Way records. Here is what publications are saying about Stanley Odd:

“Scottish hip-hop standard bearers. . . Delivery deadly, rhymes sublime” (Scotland on Sunday)
“Genuinely fresh and exciting. . . hip-hop on a par with the socially conscious likes of Jurassic 5; Michael Franti; as far back as Gil Scott-Heron, and with a pop sensibility that sneers at bling and gets on with living” (17seconds.co.uk)
“Combines the observational wit and savvy of The Streets with the full-band musicality of classic Scottish pop” (The Word)