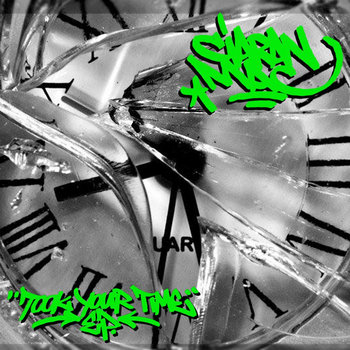 Sorry for the delay on this one. I've been travelling between countries over the past couple of weeks, thus why I took my time to get around to reviewing this EP. To be fair, my short time in Scotland was hectic but fruitful. Myself and Leo (M1sterman) managed to link up and properly set out the next few months on Scotland Standup (as well as his Just a Minute project).

Since taking over from Scuba we've decided to move the site in the direction of reviews and features, especially with the website less likely to work as a promotional tool if we're just feeding this shit back to you guys - MC's and producers within the scene already (not to mention, John Kerr has been doing that more capably on Underground Scotland). If I'm honest, volunteering to review small, unsigned acts can feel like more of a 'charity' contribution than something that in any advances my personal career - we do this blog for the love at the moment. With all that out of the way, it is therefore refreshing that there a few up-and-comers on the scene that I've been excited about.

There has been a buzz about Ciaran Mac for a while, but I didn't get to see him live until Louie's Christmas event at King Tuts in December. There was an energy in the room that you only really encounter with a hyped MC, but the hype is fully justified. Took Your Time is not necessarily a stunning full body of work, rather it is an indication of intent. Sure, the songs here are pretty short, with some coming across like throwaway verses that worked with a beat over two minutes. However, the two/three longer tracks got me pretty bloody excited, which I'll admit doesn't happen a lot with Scottish hip hop.

'Go With It' is the first example of Ciaran Mac demonstrating a natural command of multisyllabics, as well as a crisp, clear flow. Perhaps he still needs to work on matching his vocal inflections to a beat, but there's definitely a sense of momentum to the track regardless. His writing's slick, not just throwing in irrelevant similes and self-adulatory statements like some of his peers (although I did like "your style's dead like Maggie Thatcherism"). This is something Ciaran addresses himself on the EP highlight 'Repetitive Beats', as he delivers an indictment of the whole scene:

"Here's a quick suggestion: don't spit it just because it fits a sentence / or think cos you writ' it it's impressing us. I'm giving you the script in hidden messages / and if it's ever bit then I'll get tetanus and inject it in my penmanship." Jeeeeeez.

In a world where battle rappers are a dime a dozen, and multis are frequently forced and overused, Ciaran has a rare talent for using them in a clever and often humorous manner. On 'Wind Yer Neck In' he boasts that he's just a "Scottish kid that's talking pish" and jokes that he's "proper rich" and "got a bitch that owns a rocket ship".

As I suggested previously, the songs here aren't long enough to merit place on a full album but the choices for productions are notable. Konchis provides a suitably atmospheric beat for 'Repetitive Beats' that suits Ciaran's flow wonderfully. Meanwhile Soundthief, Bunty and others feature to give the EP a retro feel. This is not a bad direction for Ciaran to go, but perhaps an album would have to be sequenced better.

Regardless, there is enough on this EP to at least encourage listeners to watch out for more of this dude. Besides, for £3 on Bandcamp, it's a feckin steal as well: http://ciaranmac.bandcamp.com/album/took-your-time-ep.

COMING UP ON SSU: Review of another debut EP from a dope newcomer - O'b. Also reviews of Loki and the early stages of a documentary.

Oh, and @those who went to 'The Battles of Stirling Bridge' I found some of the mythical battle/cypher footage shot in Stirling, me and Leo might try and upload some in the near future. Professional people that we are. x