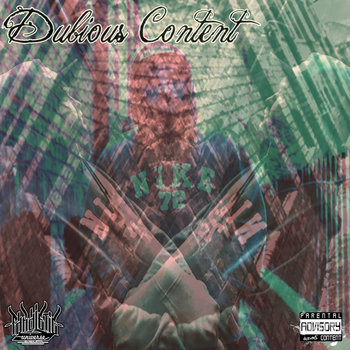 I can confess that when it comes to Boom Bap, I am biased. My first incursions into hip hop were New York classics: 'Illmatic', 'The Infamous', 'Moment of Truth', you know the drill. Therefore when I hear throwbacks to the style, despite its reputation for allowing stagnancy within the Scottish/English scenes, I am naturally supportive of the MC's intentions. Dubious Content is an open subscriber to this nineties philosophy, and this is not only obvious in the production but also the lyrical content on his debut EP.

For those aren't yet up on Dubious Content, you may well remember him as Profanity who battled on Don't Flop and represented Gorilla Tactics. Lego, his old sparring partner, seems to have left a stylistic mark, at least based on the choppy rhyming patterns and monotone delivery that Dubious utilises here. The aesthetic is established well: crisp sound, double-tracked vocals, string sounds and even scratching. 'Life As I Know It' and 'Pissin On the Mainstream' both suit Dubious' vocals well, invoking the sense that he's the villainous 'blagger' causing a ruckus over fairytale beats. Incidentally, though I think the drums could pack more punch, 'Gift of the Blag' is a particular highlight.

Dubious' persona works well but the lyrical scope is perhaps limited. The EP does not provide much in the way of wordplay or poetic device, settling for rehashing the same old mantras such as 'nobody in the mainstream can rap anymore' and 'I miss the golden age'. This classic underground doctrine would perhaps be better articulated if it was presented more creatively, rather than just aggressively attacking popular MC's (the creative Kendrick Lamar is an odd target in particular). With that all said, the passionate 'State of Affairs' does work as a great back and forth between Dubious and Edinburgh MC's EVIL and One OZ, reminding of classic trios Rhyme Asylum and Non Phixion. Plus the beat is fucking dope.

Though parts of it may feel more like a rant than a full blown project at times, Dubious Content has still crafted an admirable and technically adept debut EP. In terms of rapping, few can argue with his abilities, and he has a particular taste for matching vocals and patterns with the tone of a track. His battling has a clear impact on his style, but if he showcases more dexterity in terms of concepts to match his big punchlines, a full-blown LP will be a success.

Opinions all mine as ever. Subscribe to Dubious Content's battle league on Youtube - Breaking Bars. Check out his recent battle with Loki on this channel.
Also - we're starting shooting for the referendum video feature in the coming weeks. Contact to get involved - those who've already contacted, I'll get back to you on dates soon.
Newer Post Older Post Home