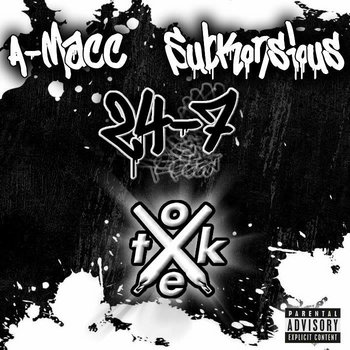 Rimmer's back on the reviews - the first of 2014 - with Subs and A-Macc getting unbiased appraisal of their latest EP '24-7'.

Having reviewed both Subkonsious and Deadsoundz on Scotland Standup, I am very much familiar with his crew's inclinations when it comes to rhyming and beats. Deadsoundz' previous material definitely showcased a combative, battle-oriented approach to rhyming that radiated energy. However '24-7' is a slight departure from the type of vibes that permeated the 'Initiation' EP, for example. This is a much more lethargic affair.

With that said, it is not difficult to appreciate what the duo have attempted here; Subz and A-Macc have a natural chemistry that compliments the style of music they want to make. It would not be unfair to say that the two have the most laid-back, monotone voices in their crew, and this immediately gives the EP a certain subtlety. The production here is more obscure, utilising sitar samples, chopping up strings and horns and enforcing a confused (even unsettled) backdrop through the stuttered drum beats. A previous criticism of mine was the lack of content in Subs' rhymes but to his and his partner's credit, '24-7' is also more lyrically adventurous. Opening track 'Lifted Up' also manages to fulfil its role of "token weed track" without resorting to clichéd bars.

Still, the project often feels ambitious but half-baked. Some of the tracks, notably 'Wake Up', are way too short and cut off just as they are starting to reach full flight. 'Time Never Waits' works nicely with the addition of Q-Riot, who mixed and mastered this EP, if only because it means we get more than two verses per track. Though the pair have a good grasp of cadence and flowing to match a beat, I would also point to the hooks as a point needing improvement. The vocal production all round seems to deliberately restrain the clarity of both MC's. I got the impression that this was to match the lazy, chilled-out aesthetic but their emphasis on hooks means that this falls flat, especially when the tracks are only two minutes long.

Perhaps the EP is slightly lazy in execution then, feeling more like an experimental demo than a fully-fledged EP. To their credit though, the cypher verses seem to be a thing of the past and although the beats don't always work, they are progressing and developing. I am of the personal opinion that the four Deadsoundz MCs work better as a unit than a half, partly due to the variety of styles on display. The next step must surely be to devise an LP that is as conceptually inspired and nails the production.