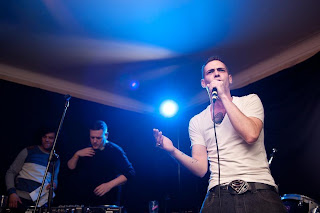 We here at Scotland Standup got speaking to another 1/3 of Cerberus, this time we speak with TheMAKA!!

How long have you been making music?
I've been making music for years. Since I was around 14, playing guitar and bass in a couple of bands and singing in one aswell. I've been writing lyrics for years aswell, only I've taken the time and worked hard to develop a good flow and lyrical content before releasing anything.

How many songs /albums have you released to date?
I've released 1 before in a london accent a while back, it was only when I was enlightened about Scottish Rap that I started doing it properly, in my native accent, with my Cerberus brothers (Number 13, Lex Lethal). Since then, we have released 8 tracks since purchasing my recording gear a couple of months ago.

Can you tell us about your new project and the background and inspirations behind it?
I'm currently working on my Rhythm Assisted Prophecies E.P. It will be a 6 track E.P. around the premise of "I've taken my time, been perfecting my shit, now I'm here to show you what hard work and persistance can do". The inspiration behind it has been many things, from people around my area never hearing scottish rap and me wanting to bring it to my home audience, to my mrs and children and my life now and growing up bullied to the point of getting the fucking hatchet out lol.
How have you ended up in the music industry?
I've felt like music has been my home since I was a really wee guy, 5/6 years old so I think it has just been my life's natural progression.

What do you think of the music industry at the moment?
The mainstream/popular part of the industry is going down faster than Tulisa on an intent to supply charge. With "rappers" like Kanye West, all of Young Money, Drake, Jay Z, Soulja Boy, Wiz Khalifa and others making a mockery of lyricism. It's all about the underground for me, in fact Scottish rap and Tech N9ne are all I listen to now.

Who inspires you when you make your music?
My kids and Mrs inspire me, My Cerberus bros, The Scottish  scene as a whole and Tech N9ne.

If you were one of the Seven Dwarves, which one would you be?
Sleepy.... I love my bed 'n she loves me tae.

Who have you collaborated with so far in your Career?
My Cerberus Brothers of course, also in the works are collabs with Wee D, Lumanes, Q Riot, Madhat McGore and Johnny Cypher.

Who would you like to collaborate with in the future?
A Cerberus-DeadsoundZ track - we would all destroy that!! Number 1 on the list of artists I want to collab with has to be Glasgows MOG, he has to be my favourite rapper of all time.

What was the first album u bought?
Chimaera - The Impossibility Of Reason. Canny whack a bit of "punch the face off ye" metal.

Whats your favorite song at the moment?
MOG - Evolution or Do You Blame Me both are Amazing!

If you had to sell your music collection tomorrow, what album would you leave in your drawer?
MOG - Based on a Blue Story.

What do you think of TV music talent show competitions?
I don't.

How many hats do you own?
I own 2 Flat peak hats as of now, always wanted a few of those Slasher style hats Steve ET is always on about though, gonny get me a few of them.

Whats your favorite takeaway?
Pork cury with boiled rice and a portion of beansprouts... Oh ya fucker, I want one right now.

What's your favourite Swear word?
BASTARDFACE!!! It's a stoater.

How many followers do you have on twitter?
I have 104 followers as of now @OfficialMAKA

How do you feel about Scottish Hip Hop at the moment?
I love Scottish hiphop. It has become an integral part of me. I wouldnt be sane without it.

Anything else you would like to add?
Cheers for the interview bro. Everybody, check me and the Cerberus boys, along with some of the best in Scottish rap, at the art school in Glasgow, 24th July, which is a charity gig for Yorkhill Children's Hospital and the Children's Heart Unit Foundation (Newcastle), set up by myself and Cain at Crown Sound. Follow on the twitter above and on facebook  and SoundCloud at the links here: https://www.facebook.com/OfficialMAKA https://soundcloud.com/john-themaka-mcaleese And Cerberus on SoundCloud: https://soundcloud.com/cerberus_666.
Cheers!
Newer Post Older Post Home