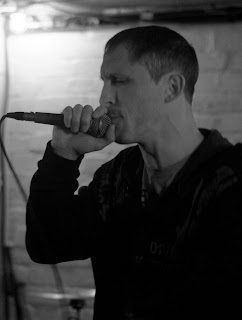 Scotland Standup got talking with GBh one of the many Deadlife members about his views on Scottish Hiphop and various other aspects of music and life.

How long have you been making music?
Ive actually been making music since i was very young ( about 15 , so thats about 16/ 17 years) but i have explored loads of different genres whilst making music ,i used to be part of a group called Nhialism which was a 3 piece Gabber / Hardcore group - shouts to M.Dope n A. Gobbi and i also love to make soundscapes for video, editing foley and sounds for multimedia)  i have always had a passion for production of music and im also a HND qualified sound engineer so ive always had something musical going on in my life and that later progressed into lyrical pastures when i met some great influences and freinds on a national project called Glasgow Urban Collective

How many songs /albums have you released to date?
I've released 2 albums to date and i am working on another solo album at the moment as well as an album with my crew Deadlife Entertainment,  an album under the guise of Audio-Philes with my good friend   Adam-Son which was called Resonant Stories, and also i have released Inner Thoughts of an Outsider , apart from that i have collabed and made music with lots of people in lots of different genres.

Can you tell us about your new project and the background and inspirations behind it?
My new project is untitled as yet and is coming along very nicely, it has some great concepts throughout, inspiration wise i cant pinpoint any one particular thing because i find inspiration in everyday stuff and all manner of things that go on in and around my life , my family n kids , crew members , and talented people ....but inspiration can hit you when your least expecting it so i just use the things that provoke thoughts and spark that creativity in my mind.

How have you ended up in the music industry?
i ended up in the music industry by way of going to college to study sound engineering / music production as it has always been a passion and intruiging to me , so thats how it began but i have meandered through different paths of it at different times in my life , be it production, lyricism , event organisation or performing ive always had something going on

What do you think of the music industry at the moment?
i think the music industrys a whole lot different from when i first got involved , the loudness wars and the rise of mp3 has shaped the industry into a whole new perspective and shape but its still in good shape i think, and as long as talented people keep working hard and doing their thing itll remain that way.

Who inspires you when you make your music?
People in my life , wether it be in a small capacity or really closely, i pick up msall pieces of inspiration everywhere and not just from people , it could be from something i see / hear / taste even, inspiration is a weird and wonderful feeling and when it happens it happens. you just have to know how to harness it and use it to your ability, my kids and family are always big pieces of inspiration to me

If you were one of the Seven Dwarves, which one would you be?
Id be the 8th Dwarf , Sleazy :) Watch out Snow White

Who would you like to collaborate with in the future?
Id love to collaborate with a multitude of different artists both underground and mainstream, but underground scottish artists id like to work with would be MOG, Loki, Mistah Bohze , Baltik n Export (Cauld Cauldron) Misplaced Mind , Silvertongue, Adam Holmes and Strong Tone
Id also love to collab with my oldest daughter Beth Lynch, as she is an amzing singer and has been writing her own songs since she was 10, one of which i produced, its called I wish i could touch the stars . find it on you tube

Whats your favorite song at the moment?
Green Bag Society by Gupsie n his brother Steelioz , you can find their EP on bandcamp,(EL HERMANDOS GONZALEZ)  and its free so go fuckin get it

If you had to sell your music collection tomorrow, what album would you leave in your drawer?
Linkin Park , Hybrid Theory or Sheryl Crow Tuesday Night Music Club

What do you think of TV music talent show competitions?
I think if you want to go down that road n think you can be successful with it then thats fine and its your own choice at the end of the day , but along the way you have to keep your own persona and dont let music companies n labels shape you into something your not as it happens to too many good artists. I watched The Voice last season and Vince Kidd was an astounding male vocalist and produced an excellent piece of production of an old Elvis tune and his vocals were excellent , now when u look for him on youtube ( as hes not been seen since the voice programs ) hes been moulded into something he wasnt to start out with so its all too easy to let the hype of fame grasp you n warp your original vision of what u want from music.

What do you do when your not making music?
i work, spend time with family , cook, or go to gigs

How many hats do you own?
not a single fuckin one

What's your favourite Swear word?
Fuck thats a good question...... probably FUCK , or  ARSEHOLE .... but i use them all , and very very frequently

How many followers do you have on twitter?
348, but i dont use it that much , unless im promoting mine or someone elses music :)

How do you feel about Scottish Hip Hop at the moment?
Scottish Hiphop is probably in its best condition for years , the likes of Hector Bizerk , Stanley Odd , Mistah Bohze, MOG and Loki are benchmarks that all scottish hiphop artists should be aiming for , as over the years these acts have put some of the best music among the masses and will continue to do so for a long time in my opinion.

Anything else you would like to add?
Check out the new Deadlife album when it drops very soon, and keep an eye for solo projects from myself and the rest of the Deadlife

COURTYARD BATTLES 29TH JUNE , GET YERSELFS ALONG FOR A DAY AT THE BEACH N SOME VERBAL SHANANIGANS AT NIGHT !!!