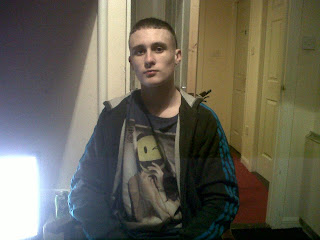 We took some time out to talk to Glasgow's Maniac.

How long have you been making music?
I started making music when I was 11 just writing lyrics, got involved in Scottish Hip Hop about 2-3 years ago. I've been away for a while but I'll be back very soon to haunt your burds bedroom.

How many songs /albums have you released to date?
I have only ever released about 3-4 tracks, I've always been a bit of a perfectionist when it comes to my music so when I start my album I will be taking a long time to work on it.

Can you tell us about your new project and the background and inspirations behind it?
I am working on a concept EP with Loaded it's called "My Twisted Interpretation" Loaded came to me with the idea and I was automatically interested, at first he only wanted me on a hook for it but when we finished the track he wanted me to do the full EP with him.

How have you ended up in the music industry?
Ever since I was a wayne I was a huge Hip-Hop head then I eventually got around to writing my own lyrics, then I met Loaded and we started working together about 2 years ago, I still find it weird that I have never released a track that doesn't have him on it. Loaded then signed me to Complex Events at the start of this year and the things he has lined-up for all the artists on the label is great.

What do you think of the music industry at the moment?
I will be brutally honest, I prefer Goldenage Hip-Hop but I do enjoy the odd mainstream track from time to time.

Who inspires you when you make your music?
Mainly Axl Rose & DMX.

If you were one of the Seven Dwarves, which one would you be?
None of them, they don't measure up to me. Wee fannys.

Who have you collaborated with so far in your Career?
Loaded, Shadoh & GiroBuster.

Who would you like to collaborate with in the future?
I'd love to do a Rock/Hip-Hop track with Axl Rose and I'd like to get another collab with Shadoh and I'm always down to do tracks with Loaded, me and Loaded always work really well together.

What was the first album u bought?
Jackson 5 - The Ultimate Collection

Whats your favorite song at the moment?
Guns N' Roses - You Could Be Mine

If you had to sell your music collection tomorrow, what album would you leave in your drawer?
I'm more into downloading music, last time I bought a hard copy of an album I was about 15 so the disc is probably chewed up. Fuckin cats for ye.

What do you think of TV music talent show competitions?
I watch the auditions to have a laugh at them but other than that I am not interested at all. I don't respect singers that can sing but don't write their own lyrics, In my opinion you have to do both to be the real deal.

What do you do when your not making music?
I get drunk.. a lot.

How many hats do you own?
3 but there's only one in my house, lost one at a party and I think one of them is kicking about in my back garden.. I blame the cats.. probably was one of those wee bastards.

Whats your favorite takeaway?
Chinese, favorite food of all time.

What's your favorite Swear word?
I love the word, Cunt, it's a good word and it's an everyday thing if ye get me ;)

How many followers do you have on twitter?
I hate it, don't know how to use it, wouldn't use it even if I did know, FUCK TWITTER.

What was the reason behind you leaving the scene?
I just got to much into drinking all the time. More drink, less music. But these days it's the other way around, if Loaded never gave me a push and made me bump into Hip Hop again like ''what's happening, mate?'' I probably wouldn't be doing it again right now.

You've done a few battle's in Scotland, what would you say was your best performance?
Maniac Vs. Gupsie. My battle with Mista Bee still makes me cringe to this day.

Are you planning to return to battling?
Not anytime soon, I'm more focused on music these days. Music will come first before anything from now on.

Is there a particular Battler you favor?
I haven't watched any battles in months but I like Uno Lavoz, Lunar C, Wee D, and Louie.

Who do you rate as a recording artists in Scotland?
Loaded, Shadoh, GiroBuster, Wee D. I like a bit of Genocide Regime and Cauld Cauldron as well. They're dope.

You seem to have a passion for cats, care to expand on that?
I used to knock fuck out cats. You could say I'm a sadist, fuck it. I'm kidding on...MEOWWWW!

Anything else you would like to add?
Cheers for the interview, gimme another one right now.. I'll tell ye my whole fucking life story.
Newer Post Older Post Home