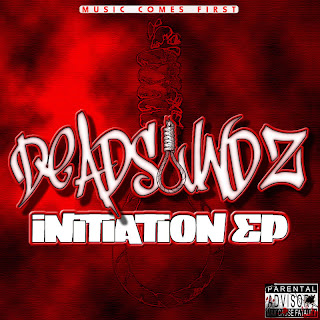 Deadsoundz - Initation EP
Considering Deadsoundz are relatively new on the Glasgow scene, there is lots to be positive about this crew from Drumchapel. This debut EP, released on Music Comes First records (also home of Madhat McGore), is an impassioned effort that sounds fresh but also belies the short time span they've been together.

The first thing that is distinctly noticeable about these guys is the way they compliment each other and each bring a unique flavour, not to mention the energy and passion they all bring to the mic. It will take me a bit of research to attach the voices to the names, but there is enough of a stylistic split between MCs for them to each stand out.

Simultaneously, the biggest blessing and the biggest curse here is that two tracks stand out by some distance: the celebratory 'Ready to Ride' (with a video here: http://www.youtube.com/watch?v=CXIBjlljCyY) and the more pensive 'Do It Like This'. The former boasts an infectious hook and an earworm of a beat from DJ Anemate; the track also features the best verses on the whole disc so it stands out. Oddly, the latter is produced by Dumbarton's Scant Squad with a beat that sounds more Primo than the actual DJ Premier dub before it. With its use of piano and horns for the hook, it is one of the best "Scottish Boom Bap" styled tracks I've heard. Each of MC's contributions fit nicely here too, with lyrics dissecting inner demons and dealing with struggle in a distinctly Scottish manner ("if you can't throw a punch then you're wasting your time").

Perhaps unsurprisingly for a debut, there's a lot of hunger here, but not always the lyrical bite to match. The Deadsoundz crew are all technically on point, which is perhaps why they frequently fall into the trap of using "hype filler". 'On & On' is a good example, with plenty of justified boasts that they're killing it "with multisyllabics" but the claim that they're "spitting original rhymes" carries less credence. This lack of content can be frustrating, even if it's structured nicely (and with the occasional metaphor to boot).

So it's a debut EP with a few filler tracks, which was probably inevitable, but if the group can bring some more bars on a full release - and use consistent, less esoteric production - these guys could spark a real buzz. This is a free EP and you can download it at http://www.mcfr.co.uk/media.php.

HIGHLIGHTS: 'Do It Like This', five MCs that all flow good and work well together, couple of superb beats 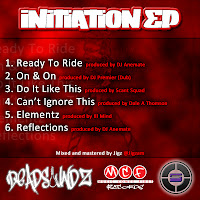