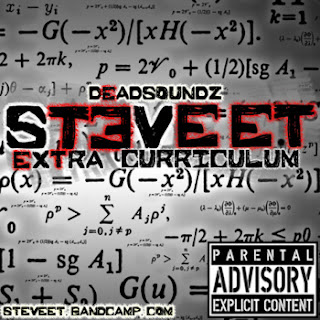 Before I start this, I'd just like to commend Steve on his marvelous work rate. 3 releases in 9 months, fucking madness.

This is yet another excellent release from Steve-E-T,  it has a mixture of different styles which keeps it different and entertaining. With so much music in a short space of time, it would be very easy to go off track and get stuck in a constant stream of the same music, but he hasn't. He's done well to flip his style every so often to keep it fresh and keep people listening.

On his first release there were a few minor problems that comes with just starting out, but his flow was mostly on point, he's always had good lyrics, so I didn't expect him to improve that much. He changed my mind. He managed to improve for his second release and he managed to improve even further for this release, which I think's brilliant. His flow's more fluid, there's little, to no rushing syllables, or splitting syllables to fill the bar, it's generally on point the whole way through. Considering he's only been Rapping for 2 years and there's people been rapping 5+ years and still encountering more problems with their flow is quality for him.

I should probably do a paragraph or 2 on my favourite tracks from the release, but it would be hard to choose, so I suggest you just download it and listen for yourself.

As well as top quality lyrics from Steve, this mixtape features top Scottish artists such as Louie and Werd. The group Steve works with (Deadsoundz) are also featured on the track "Pissed Off", as well as artists Kuruption and Milla featured on other tracks on the mixtape. Overall this is a top quality release and I don't know how views and downloads this release gets, but it deserves many more. Great release.

You can listen to the release by clicking here.