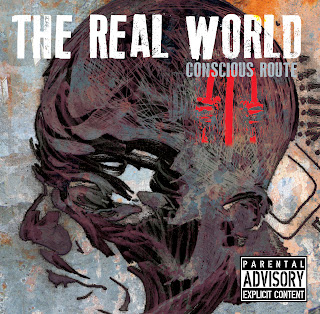 Conscious Route is a London born rapper, poet and singer-songwriter who grew up in Herfordshire near Cambridge before moving to Edinburgh, where he is now based. Conscious Route founded the CCF movement (Conscious Collaboration Front) as well as holding Conscious Collective events. Here is an artist that has a lot to say with a real talent for making songs that connect with the listener, this isn't just Hip-Hop, this is Conscious Route, something new, exciting and refreshingly original.

He is no new comer to music and is known to be an influential character who has done a lot of work in short time, as well as creating the Conscious Route band and also his new band project the Urban Folk Crowd. His past releases with Fugazi Rum where notable projects where he was better known then as Mosman. In the last six months he has released music with Werd (SOS) on the 'Nowdays EP' and the 'Hear No See No Speak No Evil EP' with Werd and also Blasfima Sinna.


With a string of leading blogs already championing the album, as well as various mixtape deejays, radio show presenters and event promoters being to get up on this talented individual, things are really stepping up for this hard working focused vocalist. With a string of features with known artists and upcoming acts this Rapper is not shy of grafting his expression, bringing positive ryhmes and heavy steady flows of reality in his verses.

Now as he gears up for his full album release on August 14th, he gives us an official free track taster of what to expect. Conscious Route and Blasfima Sinna team up on this track to tell people what 'the real world' is about, with some punch-line chat and some real-world business, this tune is a banger. Expect to be taken on a heavy ride of hard hitting beats and flows, buckle up tight and enjoy.

Connect with You Sonix Records: