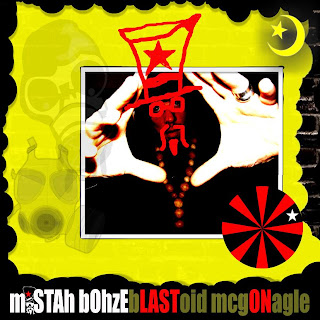 bLASToid mcgONagle is the first solo release by Scottish hip hop veteran mISTAh bOhzE. Glasgow MC mISTAh bOhzE is part of the hip hop group II Tone Committee, also known as Tones Of Twice. Members of II Tone Committee are mISTAh bOhzE, Mista Defy, Sace and DJ Krashslaughta. II Tone Committee have been making a name for hip hop in Scotland since the late 80s and are seen as legends to most in the underground hip hop scene. Even though they have sold over 30,000 records they are bigger known in Europe than the UK. This is a great album from one of the most lyrically talented MCs around.Where  of the tracks have a great old school feel to them others are a newer style, but all contain masterful lyrics and good beats, MCs featuring on this album with mISTAh bOhzE include Loki, Wee Rabb, Noize Creator Epik and more. My favourite tracks on here are Soul U Gotz? and Boy From Outer Space. This album is definitely worth buying for any Scottish hip hop fan. I’d recommend this album to anyone its full of great tracks.