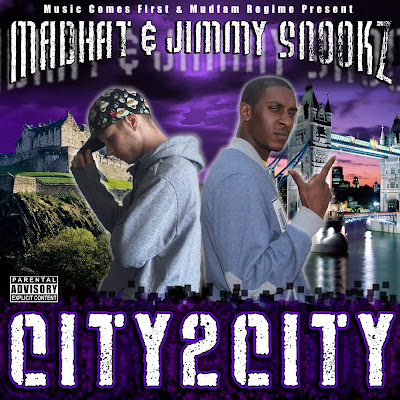 Yes folk's Madhat is back with another LP , this time starring alongside Mudfam Representative "Jimmy Snooks"

You can get the Album Here, but check out the site first before you do Here.

Now i took my time to listen as i have been busy doing other things which will all become apparent soon. But finally had a listen today.

Now for over i week i've heard comments praising the album, so expected nothing other than dopeness, unfortunately i found myself thinking "were folk listening to the same music as me".

My overall opinion is that as a collaboration album you'd expect both guys to be on top of their games and kill it, it kinda went the opposite direction for me, Madhat overshined Jimmy Snooks by miles, but not that much as his flow was onpoint and at its usual "Helfi" level, but it seemed the energy was lost and seemed as though after the journey to London he lost all his puff.

The beats were another thing that struck me a hard blow, as they were all "dirty south" and uninteresting, which saddens me as i know Madhat can tear up a decent beat.

Now i understand this on a business level as i can imagine it will sell a fair few units for hardcore "Hat" fans and Mudfam/Fedayen followers also the club hip hop heads. I think though this may be disregarded buy actual hip hop fans though.

So on a level as a business venture this was a great idea, but unfortunately it just did not appeal to me.

As always though if you don't give a shit what i think, go get it the links are above.
Peace