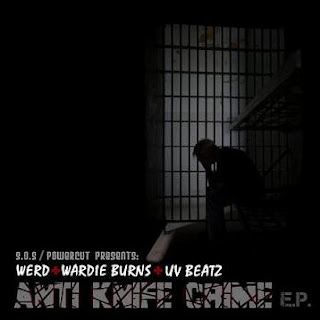 Sons of Scotland (S.O.S) / Powercut Productions have been nominated for the ‘Fear and Fashion Awards 2010’ for outstanding examples of projects that have proved successful in helping young people to stop carrying and using knives. Nominations include the following projects and activities.

(Information on SOS and Powercut’s project shown below)

SOS have been contacting many youth groups/schools in Edinburgh/Glasgow and sending batches of pressed CD’s to be given out free to those interested. Because Drew Devine (Werd) also works with youth groups teaching ‘rap and lyric writing’ he is aware just how well rap music gets across to them and will is also talking about the issues at these youth groups.

CD copies are available on request. Full colour artwork on gloss paper has also been designed for the CD in jewel case slim-line format. This music has already been played on student and national radio stations such as BBC Radio 1.

Steg G (Powercut Productions): After the original three tracks, an additional remix was provided by Steg. Also helped to promote material through the labels official website and his hip-hop radio show (Sunny Govan, Glasgow). Involved in the progression of the project and currently still contacting various possible outlets.

S.O.S. publishing based in Edinburgh, Sons of Scotland work with many talent emcees and producers in the country and abroad in the genre of ‘Scottish rap/hip-hop’.