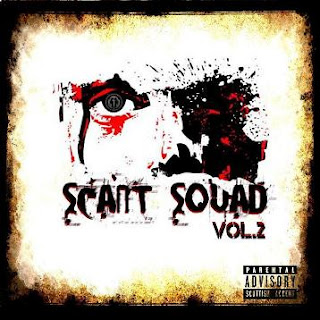 Mixtape Info:
‘Scant Squad Volume 2’ released March 2010 features production from Stevie Scant and offers a selection of hip-hop/rap from Scotland, UK joined by a few International acts from the US.

Mixtape has been released on free download however CD copies are available on request.

Scant Squad have punched in a selection of laid back beats yet when Scotland’s emcees kick it they refuse to tone down, creating an underground energy and raw sound that has been hitting airwaves and growing the genre for a number of years.
Moving on from the last release, volume two offers much of the same (if its not broke don’t fix it!). Stand-out tracks such as ‘Nightime Rap’ featuring Werd, Sleeze and Glasgow’s Nity Gritz, bring raw lyrical content to the table, likewise Madhat McGore continues to destroy tracks with his solo ‘Rep Madness’ joint. On the lighter side of the tape chill out songs such as Conductor Crucified’s ‘Glory’ and Edinburgh emcee/producer Riddlah with his ‘Entertain’ track, which does exactly that…
Mixtape Features:
Werd, Wardie Burns, The Riddlah, Madhat McGore, Nity Gritz, MC Sleeze, Twisted Methods, Chad Tha Lad, Lil Kay, KD, Butterscotch, Mr Donovan, Conductor Crucified, McGoff & Brude.

Expect to hear more in future from this growing hip-hop scene and in the meantime check out this release and other from Sons of Scotland / Scant Squad.

Artist Bio:
Scant Squad were formed back in 1998, the founding members being DJ Foz and Dj Spin.
Starting off with 2 decks, a 2 channel mixer and 3 microphones, alcohol fuelled mixtapes ensued, fast forward 10 years and they are producing beats for such artists as Werd, Wardie Burns, Nity Gritz, Chad the Lad, Donnie C, IVORY, Spit-Dis, KD, Stonez tha Riddlah and Spee 69/YMW between 2007 and 2009.

GO HERE FOR FREE SCOTTISH RAP DOWNLOADS: http://scottishrap.weebly.com
Your support is vital in the progression of rap music in Scotland.