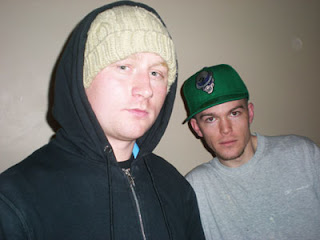 I personally think they should call themselves that.

Anyway great news from these 2 as they have just been signed to Powercut Productions - The Specialists in quality hip hop.

"These two unstopable forces met only 2 years ago, Riddlah (UVBeatz) has been keeping himself busy, working making beats and producing dope muisc with many artists across the globe but mostly on his own turf of Scotland.

Edinburgh resident Wardie Burns has been steady churning out track after track in the lab for various mixtapes and underground joints, building his fast reputation for his wicked lyrical delivery and his flow and energy .

When these two got together somthing just seemed to click in place.

Riddlah has worked on many projects as Beatmaker/Producer and he has also released two of his own mixtapes 'UVBeatz Recordings Vol.1 & Vol.2. and Riddlah is also one of the Original 'Dark Rumors along side Madhat McGore (MCFR).

Wardie has featured on tracks with a lot of known artists in the scottish scene and also has released his own mixtape ''SWINE FLU'' through ''Sons of Scotland'' ran by Werd.

Both UV Beatz and Wardie Burns come from edinburgh and all though they had never met before they both grew up in port of Leith.

They are both also members of Edinburghs finest group Twisted Methods along side Blasfimasinna (MCFR).

Now with UVBeatz & Wardie Burns on board with us here at PCP things are looking excitng as we move into a new decade...Look out for Oor Wardie..."

This Just Goes To show that hard work does eventually pay off eh.