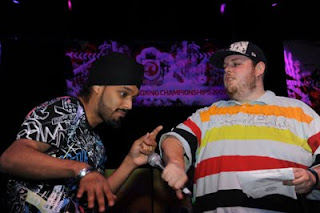 The final element of hip hop hugely represented by Rahzel back in the day, a man that has influenced pretty much every beat-boxer on the planet and none other than this man, who will get the chance (and let's be honest not many do) to support the man himself live on stage next Saturday (October 31st)

SSU - Ok Taj Can you introduce yourself to the people that dont know who you are and exactly what it is that you do?

TAJ - I go by the name of BIGG TAJ get the spelling right people!!!! haha im a beatboxer and more !! haha

SSU - What do you mean by more, are you involved in other areas of music

SSU - I'm sure i've heard you singing and rapping before can we expect to see more of that in the future, maybe a release?

TAJ - I'm not too sure! I have been doing lots of writing and have some beats but maybe one day ill drop a release full of singing mainly not rapping cause im just a bedroom rapper haha

SSU - And maybe an exclusive for the blog eh (Crosses Fingers) ?

SSU - Nice one man, so what influences do you have as an artist yourself, its always good to hear what stuff other people listen to i think?

TAJ - I guess just everyday life influences me, people who have affected me in some way I write about that kind of stuff and it brings out emotion in me and that's what i ride off of, emotion.

SSU - Excellent man, who are you feeling in the Scottish hip hop scene at the moment seeing as this is a Scottish site its only fitting that i ask you that eh?

TAJ - Im feeling Werd, Deeko, Butterscotch and of course my boy LOUIE who i will be dropping an EP with soon!!!

SSU - Now i know you do a lot of youth workshops, also working with Maad Skillz, can you tell the people a bit about the workshops you do and im interested myself to hear a bit more about the Maad Skillz workshops


TAJ - Basically i teach music software aswell and Beatboxing. Maad Skillz was started by a scientist called Tilo Kunath who works in Edinburgh Uni. We use ultrasound to look at whats happening inside the mouth of Beatboxers when we Beatbox. You can see how fast the tongue moves and the position its in. Its really good and its fun. 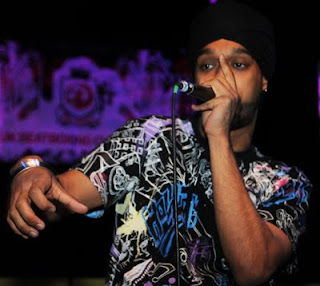 SSU - Ok i've been hearing your going to be one of the many acts supporting Rahzel Next Saturday at Cabaret Voltaire, and would imagine you'd be somewhat excited about it. and a silly question, Are you looking forward to it?

TAJ - Im defo excited!! I been listening to Rahzel since i was 16! I waited 10 years for this day and its finally come. I hope it all goes down well and i stay healthy and can rock the show! 10 years in the making haha

SSU - I'm seriously lookin forward to the gig, not only do we have Rahzel And DJ JS-1, there's a whole host of other acts performing too, whats your thoughts on the other homegrown acts on the bill?

TAJ - I think they're all good, it'll be a seriously good night.

SSU - Definetaly man. Ok now you've been working with Louie for a wee while now doin shows an stuff, and earlier on you mentioned an ep your gonna be dropping soon, can you give the peoples a wee bit more info on it?

TAJ - Well i produced it, just made loadsa beats and gave them to louie for him to write to. I think its all written we just need to record it now. Ill need to go back and listen to the beats again make sure theyre worth using haha my beat making isnt the best but i wanted to work with louie and put something out i also think he's very underrated!! If you haven't heard his tunes i advise you to get Bohemian Boombox CD which is produced by Shah!! Amazing work. So, aye hopefully be dropping something with louie soon.

SSU - Yes people cop that cd its dope, how do people get intouch with you for bookings and such?